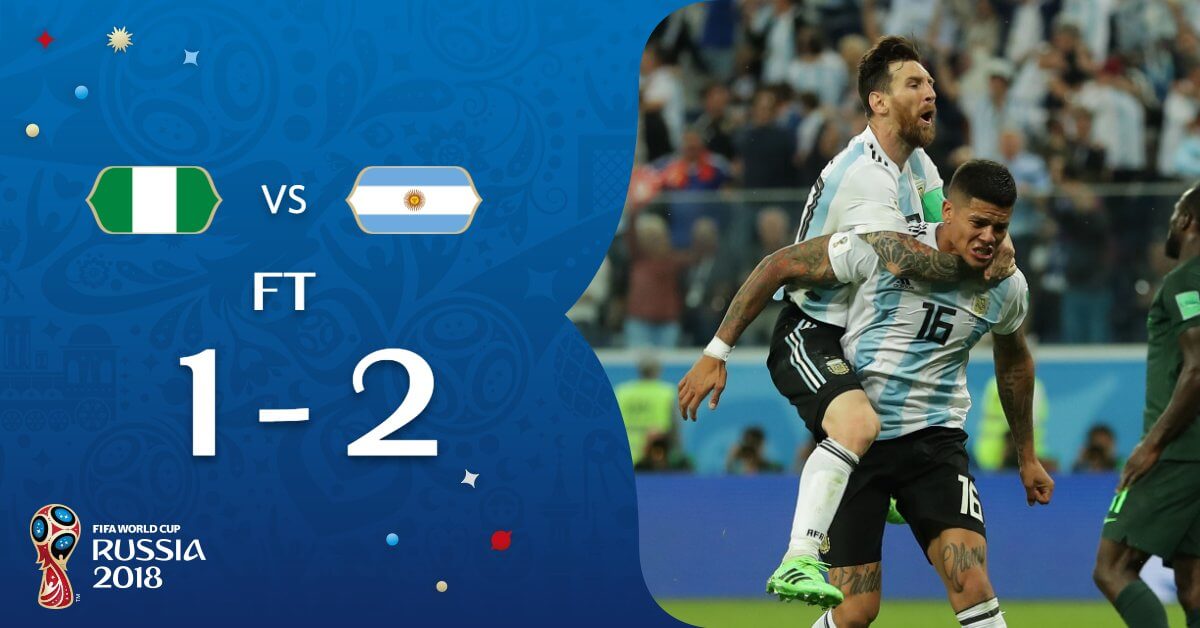 The build-up to this game had a funny twist to it. People felt that Iceland’s loss favoured Argentina’s qualification from Group D more than Nigeria. On the other hand, Nigerians believed that the Albe Celeste would be ousted from the Mundial by a first-time loss to the Super Eagles. The scoreline from the friendly at the Krasnodar Stadium was still fresh in the minds of the every patriotic Nigerian.

The D-day was here, and Nigeria rolled out unto the pitch in the same shape they deployed against Iceland – the life-saving formation 3-5-2, with the same winning line-up.

The game started and it became clear that Rohr did not make any provision to deal with lightning runs from Lionel Messi. Brian Idowu was unable to keep up with the Messi’s incursions into the final third area. There was no plan to man-mark the five-time World Best footballer. This was Nigeria’s undoing, as Messi got the first goal in less than 15 minutes in the first half.

After the goal what followed was wave after wave of attack from the Argentines. Coupled with the Super Eagles’ being a ‘second-half team’, the first half of the game was very poor for the hopeful Africans.

The second half started better for the men in green. They initiated attacks against the South Americans and soon got a goal from their effort – barely 6 minutes from the whistle. The unexpected pressure from Nigeria got them a penalty. Victor Moses scored from the spot in the 51st minute.

From then on, Argentina pushed for a match-winning result. It became a one-sided game as they pressured the Nigerians into their own half. At this point, we expected Rohr to bring in a defender, because a draw would see Nigeria qualify from the group in second place. Rohr didn’t make changes to the team, probably expecting his boys to survive the many waves of attacks from their opponents.

A brief loss of concentration and a late trackback from Victor Moses created a great combination for Marcus Rojo to score the winning goal with four minutes left to spare in the game.

At this point, it was game over for Africa’s hope of making it to the second round of the competition. It was too late to get an equaliser. The Argentines began to apply obvious delay tactics to make sure they held the scoreline until the last second.

The game ended 2-1 in favour of the South Americans, who joined Croatia in the second round stage of the tournament.

Nigeria could not make use of open chances when they came. The players could not defend the draw and lost concentration in the closing minutes of the game. It was also unfortunate that they could not also use time-wasting tactics or do whatever it took to end the game in a draw.

Nigeria vs Iceland Review
Are your priorities set by intent or outcome?

January of the Year Without

Nobody cares if you are the first

The Emerging Coaches of No Repute