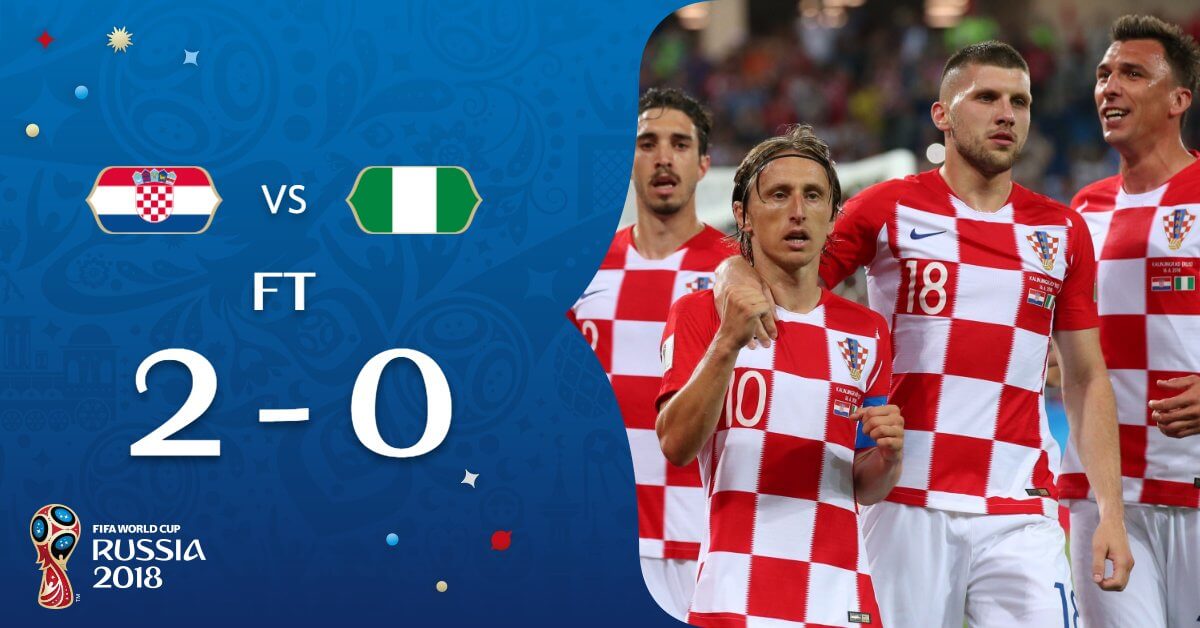 The hype finally ended on a painful note on match day, as the Super Eagles of Nigeria lost to Croatia in their first group stage game in Russia 2018.

Gernot Rohr set up his side in what looked like a 4-2-3-1 system, with Mikel behind Ighalo, Ndidi and Etebo played in midfield, while Iwobi and Moses played on the left and right side of the attack respectively. The back four remained as expected, Ekong and Balogun as centre backs, Shehu and Idowu played on the right and left side of the defence. Uzoho was in between the sticks.

We were surprised because it looked like the same way NIgeria was set up against England, especially Mikel playing behind the striker.

The match started like it could have gone either way but the Eastern Europeans picked up tempo midway and overran the Africans. Nigeria didn’t really come to the party, and lost because of blatant errors.

The first observation during the match was how the right side of the Nigerian defence was overloaded early into the game. Shehu Abdulahi had issues covering his area and this resulted in some nervous moments as the Croats advanced their attack through his zone. This made Moses track back to help out, but then it meant that Nigeria’s attack on the right side was impaired.

There were lots of hard tackles in the match, from the ‘men in white’. Many times it seemed like the referee wasn’t fair in his decisions when Nigerian players were being tackled hard.

Nigeria’s dilemma started from the midfield. They lost control of the midfield. Mikel was being passed over during play, Etebo was constantly dispossessed and Ndidi wasn’t so much of an influence. Many times when Nigeria tried to build play from the back, there was no one to pass the ball to in midfield. This forced the centre backs to hit hopeful long balls but then they were effectively dispossessed by the taller Europeans.

The first goal was an own goal by Etebo who left his position on the far post to attempt a clearance from Mandzukic’s header. He missed and the ball was in the net. This goal put on display Nigeria’s poor approach to set piece plays.

The second goal was from the penalty spot. Ekong wrapped his arms across Mandzukic, fouling him in the 18 yard box in an attempt to stop him from heading a cross from the corner flag. Modric scored from the spot, and the game was far beyond the reach of the Super Eagles.

The changes made the Nigerian bench were simple position swaps. Taking Iwobi who was the most creative player on the green side of the pitch was a big surprise. Ighalo went off for another striker, Nwankwo.

Rohr got his selection slightly wrong. He replaced the duo of Onazi and Obi, but we expected that he learnt from the friendly against England in Wembley.

Playing Mikel behind a striker surely never works. He plays better in deep midfield where his calmness on the ball improves balance and control in the midfield. Iwobi should play in the hole, because of his agility, vision and initiative. Etebo was constantly dispossessed off the ball because of his diminutive stature. Nwankwo would have been a better choice upfront because of his height and physical presence compared to Ighalo.

Going Back to Journaling