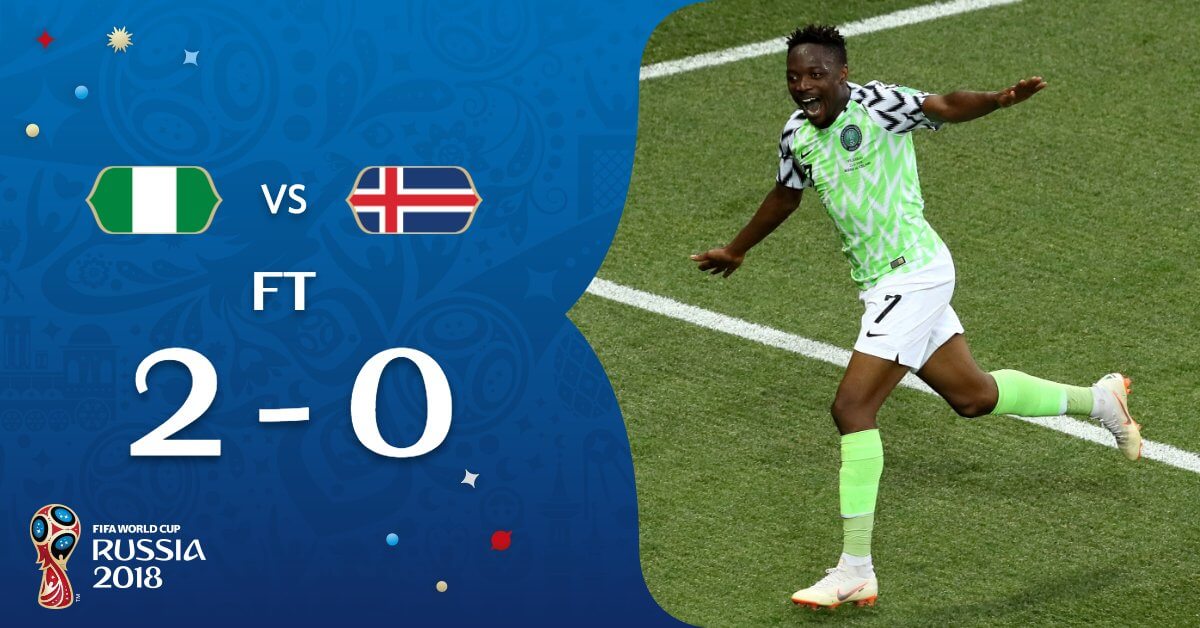 Iceland’s draw against Argentina put them as favourites against Nigeria. Apart from a handful of fanatical optimists, many Nigerians who saw Iceland’s defensive discipline against the Albe Celeste expected the game to be a tough one. After 90 minutes the Super Eagles were victorious – scoring the only two goals

Nigeria started the game with a 3-5-2 formation similar to how they played against England in the second half of the friendly at Wembley. It looked like Gernot Rohr listened to the complaints of many Nigerian fans about how the Super Eagles were set up against Croatia (I doubt that he heard any of us). The team had two men in front, and Mikel Obi returned to his deep midfield role.

Nigeria dominated the first half in terms of possession, but Iceland made all the recorded attempts on goal, by creating better openings. Some people believe that Nigeria plays better in the second half.

In the second half, it was a clear display of intent on how Nigeria played. This time they played to with a desire to win the game by pushing waves of attacks through the flanks.

Apparently, their respect for Iceland had worn off.

In quick successions, Nigeria scored two goals from counter attacks. Iceland had attacked both occasions but the run of play switched sides via a ‘ball dispossession’ and a clearance, respectively.

Ahmed Musa the scorer of the two goals, controlled Victor Moses’s cross into the box from the right and smashed it past Halldorsson in the 49th minute. For the second goal, Ahmed Musa’s picked the ball from Kenneth Omeruo’s clearance, made a run into the final third area from an advanced midfield position, cut inside with his left foot, rounded the goalkeeper and curled the ball into the net in the 75th minute.

Iceland has the chance to get one goal back, after Tyrone Ebuehi’s unfortunate contact on Finnbogasson at the top right edge of the box resulted in a penalty after the referee consulted with the VAR. Sigurdsson’s spot-kick went over the bar, and from then on the game was over for Iceland. The Nigerian defence successfully repelled desperate waves of attacks from Iceland to make sure the game ended 2-0.

3 – Iceland are the third World Cup debutants from Europe to have faced Nigeria at the tournament, and on every occasion the Eagles have emerged victorious, following victories against Greece (2-0) in 1994 and Bosnia and Herzegovina (1-0) in 2014.

You Can’t Know Everything